Big yaaaawn! Saturday morning and after a busy few weeks I think I deserve a lie in! …. As I look outside from the gaps in the curtains, I see the gorgeous blanket of snow. Perfect! Plus its -5 degrees outside so not much going to be happening out there, might as well just take the opportunity to relax. 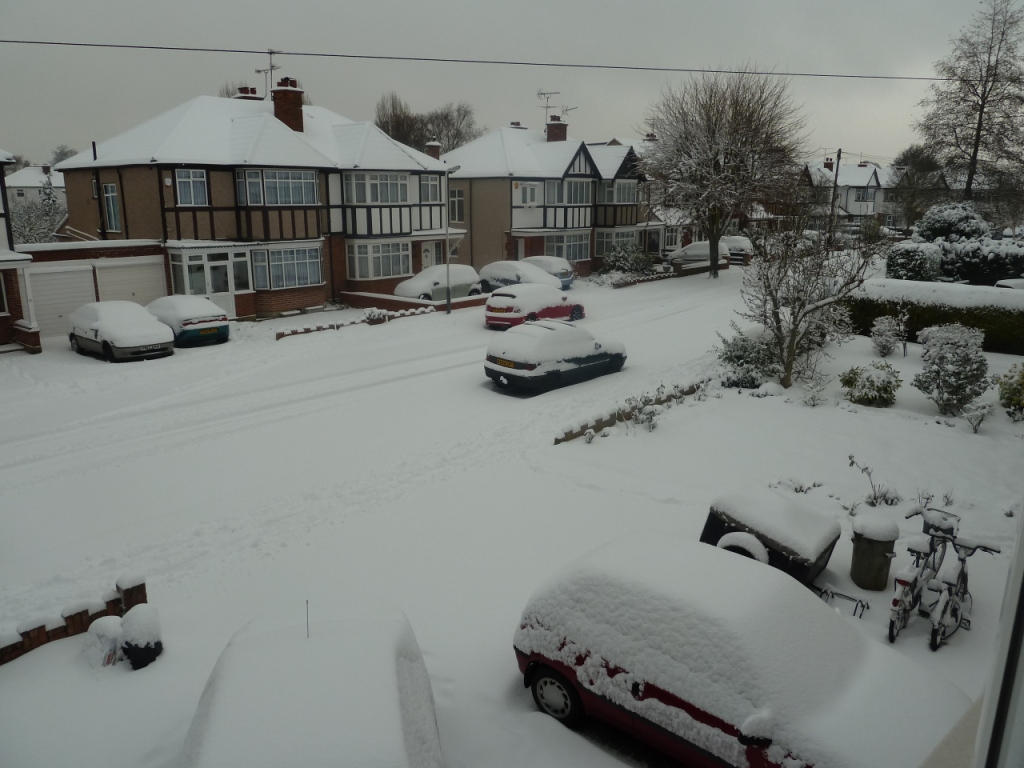 Hmm, yeup, sounds too good to be true, right? It was just TOO perfect. I decided to ‘utilise’ the bathroom. Actually to be precise I NEEDED to, I don’t think anything less than needing something was going to get me out of bed. And that’s when I realised that we had lost access to the basic amenity of running water! AARGH!!!!

Now, if you live in the UK, you’ll know that even the lightest snowfall means all services shut down. Our airports were closed all day, in fact they still aren’t fully operational and even some shopping centres had to close! (Do they know its nearly Christmas?!$*)…. So what was the likelihood of me getting a plumber to come to my rescue? While my husband Rishi, put his faith in a plumber battling the snow to save us … my panic grew every minute that passed by. How I longed for the tip tap of water in the sink…. Human’s NEED water to survive, dammit! I couldn’t wait any longer, so I did what every other panicked person would have done in this situation, I turned to Google! Google would have the answer!

And lo and behold there were several handy man, and women, describing the exact situation I was in, with some home remedies to resolve this emergency! What great suggestions they were too:

1. Heat up wet towels and put over pipes

Not sure if you’ve noticed, but all the solutions above, involve the usage of water. Um, didn’t they see my problem, NO RUNNING WATER!!! Hellooo?

Luckily, Rishi had an old bottle of water abandoned at the back of the car. So we prepared a hot water bottle and went out to defrost our pipes!…. Did I mention that our pipes were outside in the -5 degrees cold, where the snow was falling at a faster and faster pace?!!! Yes, well, after psyching myself to step out in to the white abyss, I bundled up, opened the door and bravely put my foot out in to the snow…

Now you may be expecting that I felt the cold and gave up, but no, I actually got excited. The snow was a lovely, powdery white, so pure and pretty. Perfect for ….a snow fight?!

It’s like all the worries had just blown away with the snow and the big kid inside me came out to play. So while Rishi diligently lay the hot water bottle across the frozen over pipe, I hurled snowball after snowball at him! What fun?! My hands were becoming more and more numb, my hair was changing to snow white, but who cared? How often do we get the chance to just STOP. And enjoy ourselves like little kids, not worrying about anything, because even if you wanted to do this or get that done, YOU CAN’T! Fantastic.

Natures’ way of telling the world, take a break. Chill out!

Right, so getting back to my point, this was the most ideal opportunity to tick one of my 101 in 1001 days tasks. No 71. Build a Snowman. 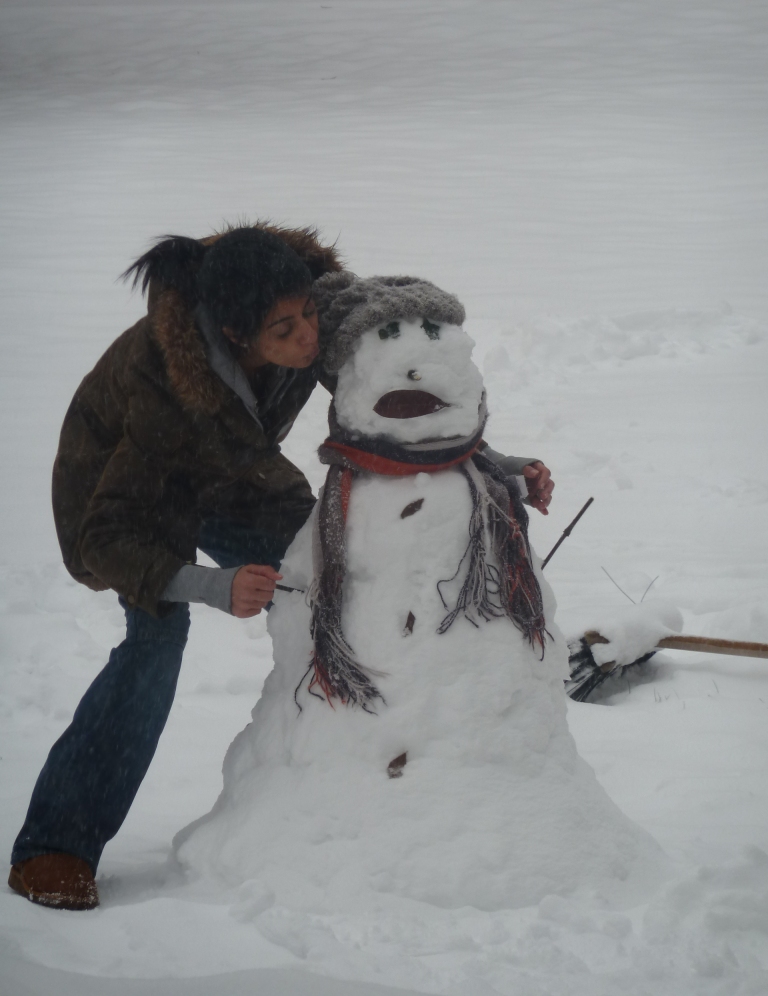 This was the first time I had done this in my life. How did 27 years just pass away without building a snowman! I must rectify the situation immediately. What you have to understand about me though, is that just because this was my first time, didn’t mean that this snowman could be anything less than perfect. Not one of those little, midget snowmen who aren’t well rounded. Nope, mine had to be one of the best snowmen ever. Let’s get to work then!

Hmm, not so easy! I battled the snow falling in my eyes, the numbness in my fingers and toes and fought on to build the best snowman ever; and bl***y h**l was it hard work. How did the little kids do it?

At some point, when the snowman still looked like a raised mound on the grass, I realised it really didn’t matter whether it was the best snowman ever. I was having so much fun working together with Rishi and letting my mind focus on just enjoying itself, my energy levels were instantly boosted. All that mattered was making the most out of this crazy morning and this beautiful opportunity. I didn’t need to sleep in. By being outside in the fresh air, warmly wrapped up ofcourse, laughing, playing and generally clowning around, I’d given my mind and body more than any extra hours of sleep would have done.

A word of warning though, before you attempt to have this level of fun. This energy boost may lead you to try out more activities which are outside of your original comfort zone. I have evidence of such behaviour. Exhibit A below: Me as a snow angel! 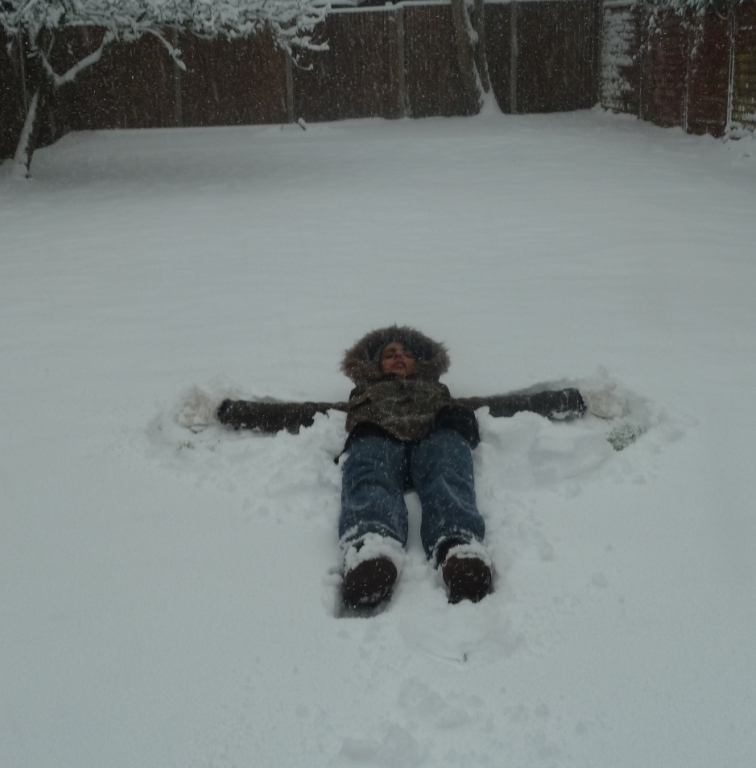 Yes that’s right, I lay down in the freezing cold snow, while snow was STILL falling and flapped my arms and legs around.

I highly recommend the focusing on enjoying yourself, and having so much fun that your energy levels sky rocket, but you have been warned, you may do more than you ever imagined you could or would before!

Ok, Ok, I’ve got to be honest…. I’m actually really proud of myself! I mean how cool is the snow angel?! LITERALLY! If this is what getting out of the comfort zone feels like, I don’t ever want to be in it! 🙂